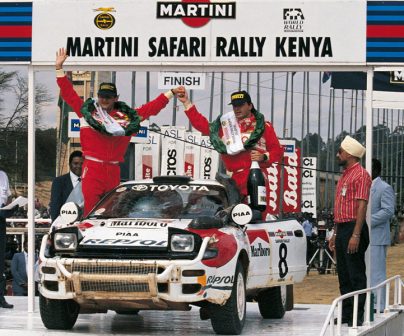 Lancia's official team, with all of its victories and titles, was officially retiring from the competition, leaving their cars in the hands of the Jolly Club, which happened to be the manufacturer that supplied Repsol with its first cars and support when it began competing in 1969.

Racing with the Lancia Delta HF Integrale, a legend on the track and in the history of competition with tens of victories and records under its belt, was a dream for Sainz, as he had been a fan of the brand since childhood. However, what looked like a dream ended up being a dark year, with some great disappointments.

The team would join Andrea Aghini with his copilot Sauro Farnocchia and Gustavo Trelles with Jorge Del Buono.

The car was the legendary Lancia Delta HF Integrale Evoluzione group A. This car, weathered after so many victories and fights to the limit against Toyota cars, performed at more than 330 hp distributed among its four wheels with a weight of only 1100 kg.

The development was entrusted to Abarth, and both the Fiat group and the Jolly Club’s sports directives affirmed that, although it was no longer a maker’s team, the model’s evolution would be continued, which was later seen to happen minimally.

For its inauguration, Montecarlo hosted a rally that, once again, barely had snow on its asphalt, but it did have treacherous ice patches.
Andrea Aghini who was winning the first lap, suffered a severe blow during the second day that destroyed his Lancia in the 12th stage, making him forfeit the rally. Meanwhile, Sainz, who was fighting to scrape seconds off the chronometer, managed to make the best time in three stages. But an ice patch ruined it all causing an accident that would have put an end to his rally, had it not been for his efficient mechanics. He went from almost finishing fourth to finishing 14th.

The following event for the team was the “Vinho do Porto” rally in Portugal. Sainz, who had requested some improvements to mitigate the great advantage demonstrated by Toyotas and Fords, was not receiving the support he expected and was trying to lessen the loss of time during races. After having won only two stages, the Delta was overturned and rolled over multiple times, and a wheel came off, making it unusable. On the plus side, his teammate Andrea made it to third place, having won in four stages.

The next destination was Corsica, for the Tour de Corse, an asphalt rally in which the improvements still had not been implemented and in which the difference between the Michelin tyres used by Sainz and the Pirelli tyres used by Aghini, tipped the scale in favour of the latter. If it weren't for an accident that forced him to retire, Andrea would have finished before Sainz who, once again, using all of the car's potential and his piloting skills, managed to win the last stage and finish fourth overall.

The next stop was Greece for the Acropolis Rally. Although Sainz and Moya were still waiting for the many issues with the Lancia to be fixed (in spite of the promises for development at the beginning of the season), they obtained good results in Greece. With their rivals suffering in the difficult gravel tracks, the Lancia managed to endure and allowed Carlos to win 11 of the stretches to finish second overall. A sweet victory after all the problems and difficulties accumulated over the previous months. His two teammates Andrea Aghini and Gustavo Trelles finished fourth and fifth, respectively.

The following meeting, across the Atlantic, took place in the tracks of the Rally Argentina. The joy from the recent second place win boosted Sainz’s desire to repeat or improve that result. Unfortunately, a few kilometres from the first stretch of the rally, the Lancia Delta’s engine was damaged and forced to retire. Only Trelles was able to gain a few points for the team placing fourth overall.

Once again, the team embarked on a long journey to the Rally New Zealand. The Delta was finally improved with some of the features Sainz requested, mainly new steering. He won the first stretch of the rally (the first of eight) but some issues in the last stretches and the resurgence of the competition ended with him finishing in fourth place. A future teammate who was still on his first tries in world championships, Colin McRae, ended up winning the rally.

They did not attend the 1000 Lakes Rally that year, but travelled directly to the Rally Australia. Only Sainz was participating and, as if it were a curse, disaster hit promptly. During the third stage, the vehicle exited the track, causing damage too severe to continue. The demoralised team went back to Europe to try and finish the year off well.

With only two events remaining for the team, Carlos and Andrea were getting ready for the Rally Sanremo in Italy. But, again, bad luck took a hold of our pilots. Carlos Sainz, after winning 4 stretches and finishing second in the rally after Gianfranco Cunico's advanced Ford Escort RS Cosworth, was disqualified for using unauthorised fuel. His teammate Andrea suffered an accident in the seventh stretch and said goodbye to the season.

The last rally of the year with the Lancia was the Rally Spain in Costa Brava, Catalonia. As if followed by ghosts of the past, Carlos suffered similar electrical problems as the ones in 1991 that left him carless, when the Lancia refused to start on the tenth stretch. This, along with a mere sixth place finish by Gustavo Trelles, concluded what would be a season worth forgetting in a car that had been Carlos Sainz's dream.

Sainz participated in three national events that year, two exhibitions in Santiago de Compostela and Oviedo and the Race of Champions in the Canary Islands, winning the Oviedo race.

1994 would come with new challenges. Carlos, along with Repsol, would take on a new team with one of the most promising cars. 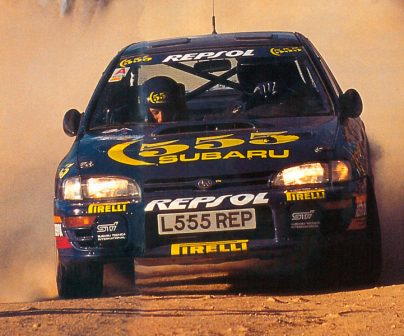