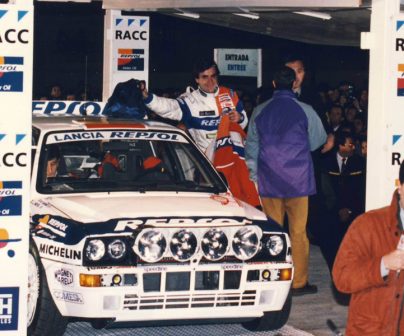 The Japanese brand Subaru had been developing the Impreza model for some time through a British company called Prodrive that was run by former rally co-driver, David Richards. The incorporation of Carlos Sainz into the competition project was fully aligned with the interests of the Japanese brand. In addition, together with Sainz, the Subaru Repsol team hired Colin McRae as a second driver.

The Subaru Impreza 555 looked like a promising vehicle. It was a shorter model than the Legacy that had raced on the tracks years ago. In '93 it jumped into action and already demonstrated that it was a competitive model, achieving second place with Ari Vatanen in the 1000 Lakes rally. Despite everything, it needed to be developed more, a task in which Carlos Sainz demonstrated that he was a maestro, as the results soon came.

The model itself was mounted with a two-litre turbocharged boxer engine that yielded around 300HP. Its six-speed transmission powered a four-wheel drive system. It had McPherson suspension on all four wheels, as well as vented disc brakes to stop the 1230 Kg weight.

This time the season would have 10 races, all of which would be scored. The team did not participate in the third, the Safari Rally.

Of course, the Monegasque event was the first of the year. The event featured a little bit of everything, rain, snow, dry asphalt, and fog spread across almost 600 km, making it an even tougher race. Sainz started calmly, with the idea of getting to know the Impreza and improving it, but he already finished second on the first day behind the the Frenchman Delecour's Ford Escort RS Cosworth. The competition was fierce, even from his own teammate who, after pushing too hard, came of the track relegating him to the bottom of the ranking.

On the second day, Carlos and Luis still hadn't had any mishaps, but were overtaken by Kankkunen's Toyota. With increasingly complicated tracks, Sainz did not take any risks and managed to finish the rally in third position, having achieved victory in two stages. McRae meanwhile went fell back in to tenth position.

With its asphalt, dirt, and gravel tracks, it promised to be a long and hard test for the Impreza, with a total of 36 stages. Of course, a huge Spanish following cheered him on Sainz throughout the race.

On the first day Sainz, pointing to the car's deficiencies on this type of terrain, lost a lot of time to his competitors, finishing seventh, while McRae followed close behind suffering the same problems. On the second day, with better understanding of the car and problems for some of his adversaries, the Spanish driver rose to fourth place overall, even achieving victory in some stages.

Arriving on the last day of the rally, after giving his all but seeing that he could not reach the leader, he settled for fourth place overall. But he did achieve a total of five victories in Portugal. McRae unfortunately suffered an oil leak and was forced to retire.

After the latest adjustments to the differentials, engine, and suspension, it seemed that Sainz would finally have a vehicle to face up to all terrains. This was soon demonstrated with the quick times set by the Spaniard in Corsica. If it hadn't been for a puncture, he would have been leading on the first day. His partner, McRae, suffered a blow after a puncture, causing serious damage to his car and forcing him to retire.

Settling for second place behind Didier Auriol, Sainz looked stronger and stronger on the asphalt stages, and aided by improved traction from the modifications, he clocked the fastest time on several sections on the second and third days. His battle with the French driver was such that both opened up a considerable gap on the other drivers.

Sainz seemed to have every possibility of achieving overall victory, but unfortunately a broken sway bar caused him problems with the tyres, but thanks to the time made up previously he finished second overall, with a total of eight stage wins.

The Impreza showed once again the great evolution it had undergone thanks to Sainz. The Spanish driver placed second after the first day while Colin McRae seemed unreachable, and achieved 6 of the day's 10 wins. The Subaru Repsol team continued to race strongly, with the British driver not relinquishing first place overall until stage 22, where Sainz ended up taking the lead. McRae suffered a mishap in the following stage, and after problems with the race stewards the he was left behind. Carlos took advantage of the competition's problems and stepped on it, finally achieving a victory, more than four minutes ahead of second place!

Across the Atlantic, Sainz proved once again to have the talent of a champion. He achieved six stage victories and finished the day first overall.
The battle with Didier Auriol, who was making up time stage by stage, promised a spectacular end to the rally. Problems with his turbo slowed Sainz's times, but digging deep he continued to rival the Frenchman.

From the mid-point of the rally right to the end, the two drivers took it in turns in leading from almost one stage to the next. It was one of the tightest rally finishes to date, and ultimately ended in Auriol's favour by just six seconds. The fight had been so aggressive that third-placed Vatanen was almost seven minutes behind.

The battle between Auriol and Sainz for the World Championship was on everyone's lips. Using that tension to their advantage, the rest of the drivers tried to make headway. McRae was flying over the slippery terrain again and lead throughout almost the entire rally, finally achieving victory.

On the contrary, Sainz suffered a strange breakdown on the fifth stage of the first day. A camshaft in the Impreza's boxer engine broke, a rare occurrence, forcing him to retire. Despite everything, thanks to McRae's victory and fifth position by his Toyota rival, Carlos was still hopeful of the title.

The participants faced one of the most spectacular and complicated races on the calendar, with its more than 500 Km gravel and dirt tracks full of gradient changes. On this occasion, only Sainz competed in the rally and with only two races remaining after this, Carlos needed a good result.

From the first day the Finn, Tommi Mäkinen, who years later would become a legend, made it clear that this was his terrain. Sainz, always among the top positions, was finally settled for third position overall, just behind Auriol.

Only 6 points behind Auriol, Sainz arrived at the Italian rally in search of victory. Sainz was flying over the asphalt terrain and over some dirt sections stage after stage, finishing first on the first day after winning eight sections and finishing more than a minute ahead of second place.

But cracks started to appear as early as the second day. Despite hanging on to the lead, the fierce battle for podium positions allowed rivals to make up ground on Sainz. Finally, and despite all the attempts by Sainz to push the Impreza to its max, his title rival was eating up time, stage after stage and with two to go, he took the lead, relegating Carlos and Luis to second place, just 21 seconds behind. The World Championship was complicated.

Sainz was counting on his rivals to make mistakes on the British rally's complicated tracks. Drawing on his prodigious talent, the Spaniard got the most out of the Subaru's performance to score a few stage wins and finish second on day one. Everything was going well for Carlos, with problems for Auriol, and McRae at that moment in the lead, with almost a two-minute advantage over his teammate.

On the last day, tragedy struck. Some logs mysteriously appeared across the road in front of Carlos's car, and later, under all the pressure, he made a mistake at a curve that caused him to retire and left him World Championship runner-up.

An intense year, full of memorable moments but also, with some dark times that disrupted what could have been his third title. The following season, Sainz returned to the fray with the same car and of course, with Repsol by his side.