The fourth race of the season took place at the Le Mans Circuit, together with the French Grand Prix, after some light rain that left the track wet for the first few laps.

Starting from pole position, Yuki Kunii took the lead from the first lap and escaped, taking up to 8 seconds of advantage.

After him, a group of four drivers: García, Alcoba, Holgado and Baltus, fought for the second place until the very last lap.

With this result, Kunii increased his lead to 70 points, 13 more than the second, Jeremy Alcoba.

The next round of the FIM CEV Repsol will take place on June 9, at the Circuit de Barcelona- Catalunya, where there will be two races of the FIM Moto3™ Junior World Championship, two more of the Moto2 European Championsip and one of the European Talent Cup. 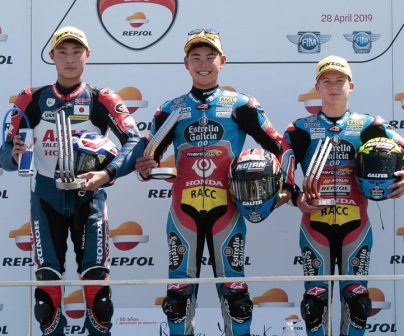 It was an amazing race. I was starting from pole and from the begining I pushed to the max to build some advantage. I kept pushing the whole race and in the end I focused on keeping my position. It’s my second win of the season and I’m very happy. Thanks a lot to my team and my family