Five years ago, the FIM CEV Repsol crossed its borders and in 2019 will have two of its eight rounds again outside of Spain. The kick-off will be this weekend in Portugal, that will hold the first round at the Estoril circuit, where there will be the first races of the Moto3 Junior World Championship, the Moto2 European Championship –which will have two races– and the European Talent Cup –which will also have two races–.

More than 130 riders with 24 different nationalities will compete in the three categories that have become the stepping stone to the World Championship. After all, more than half of the current riders in MotoGP have come from this national championship: from Marc Márquez and Jorge Lorenzo, to Fabio Quartararo or ‘Pecco’ Bagnaia, among many others. This is the seventh season in which Repsol supports this cradle of future motorcycling champions, within its social commitment to the training of young riders, a pillar in the 50 years in which Repsol has been supporting and sponsoring motorsports. 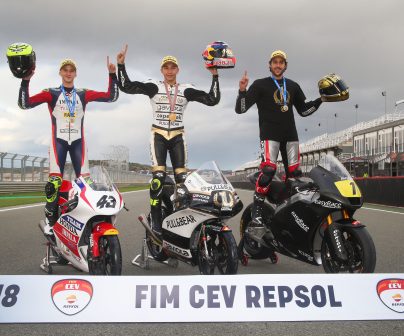 The FIM CEV Repsol 2018 lowers the curtain with crowns for Fernández a...